I have decided to do a review for the AppStore game called ‘Bike or Die 2‘. I first actually heard of this game back in the day when I had a Palm. They had a black and white version which I used ery often and having download the ‘Bike or Die 2’ version of the game for the iPhone it brought back good memories. In fact, the first few levels included in the ‘Bike or Die 2‘ game were identical to the ones in the original version. It cost $2.99 for the game on the AppStore.

The game actually has around 400 different levels included in the download. However, they also have countless more that you can download straight onto your iPhone/iPod Touch over the internet or 3G network. They are small files so they don’t take alot of space on your iPhone.

Here are some screenshots of the game. 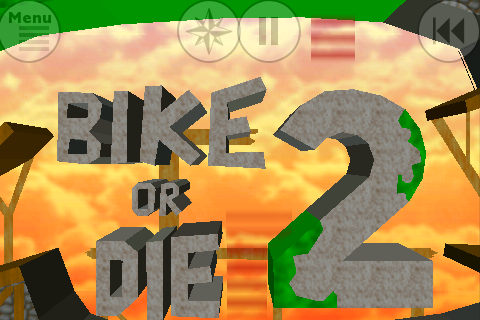 The game can be both played in portrait or landscape. You control the game with an accelerator, break and two balancing buttons. 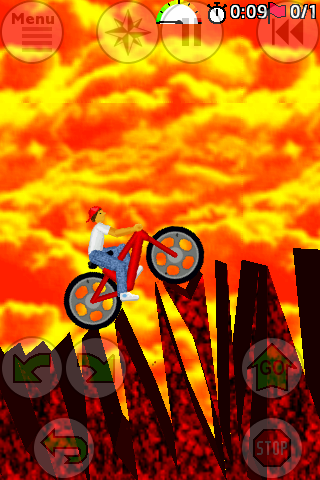 On the left, at the bottom is a button which turns you to the opposite direction. On the top (from left to right) is the Menu button, zoom out to see the whole of the course, pause button and the button that returns you to the beginning of the level.

Here is a video of the game.

You can listen to the ingame music which is decent or you can turn on the Music switch and listen to your own iPhone/iPod Touchs music.

You can also RECORD you doing your levels and then watch them later. When you save it, you can switch little switches saying ‘Freestyle’ which means that you werent trying to be fast, just fancy. For example, you can do tricks such as backflips/frontflips and others.

You can change the colour and texture of the course making it ‘textured’, ‘solid’ and ‘outline’. It takes the time of each of the courses you do and you can submit the times onto the hall of fame on the creators website, Click Gamer. You can also change the actual biker from the new actual person (as seen in the above screenshots) or a stick man like in the original Palm game.

OVERALL:
I would definately recommend this game. It is without a doubt worth the $2.99 that I payed for it, if not  more. It is addicting and I playing it atleast once a day. It has hours and hours of gameplay with the thousands of download level packs, customizable and records each level.