Finally, a ‘Rock Paper Scissors’ game has been created and released on the AppStore. This game was created by Zerion Software and is called Rochambeau.

Here is a section of their press release of the game:

The new game is based on the classic version of game play, but is far from the run-of-the-mill variety. Choose one of the cartoon characters and play against the capable computer adversary, or one of your friends on your AIM buddy list. Shake your iPhone or iPod touch to make your moves, and then watch the game unfold with creative animation and sound effects. Choose your cartoon player and play against the capable ‘bot’ or friends across the globe. 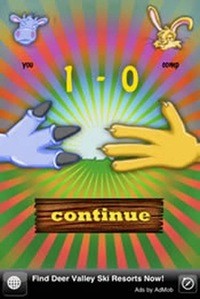 This game is free but has some ads in it.