iPod Touch 2nd Generation Jailbroken Screenshot – Not for Public Yet

Dev Team have posted on their blog about firstly, the http://redsn0w.com/ confirming that they had found an exploit in the iPod Touch 2nd Generation which is leading them to be able to jailbreak it.

Update 1: Here is the first screenshot of a jailbroken iPod Touch 2G.  Right now the jailbreak process is far too manual to be useful to most people. But this is a first step (well, second step if you include the initial exploit).

When we announced yellowsn0w, we made the mistake of giving an ETA for its release…and that really clobbered the last day of 2008 for us.  So we won’t be issuing a formal ETA for the ipt2G jailbreak.  But we are putting a lot of energy into it. 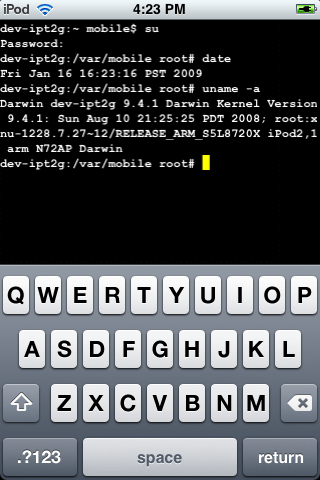 Update 2: A picture is worth a 1000 words but a video might be better in this day of Photoshop and fake YouTube videos.  So we’re thinking of doing what we did before Christmas for yellowsn0w — show a demo of the jailbreak on Musclenerd’s Qik account (announced via his twitter account over there on the right hand side).  Since Qik provides a live chatroom right next to the video, we’ll probably be in there too right after the video’s over. Note: anybody posing as any devteam member on that chat right now is faking it.  We won’t be on that chat except for a very specific time that we’ll announce. (We may possibly not even do the chat since it’s so ripe for abuse).

Update 3: It looks like we’ll do the Qik broadcast on Saturday afternoon (California time).  It’ll be announced through MuscleNerd’s twitter.  Unfortunately the Qik chatroom seems unmanageable, with no way to control the nicknames being used. So we’ll avoid it altogether — nobody on the Qik chat claiming to be us is actually us, so please don’t be fooled.